Thank you to everyone who made a donation to Operation Elf, which is designed to bring hope, joy, and the
spirit of the holidays to children who are wards of the state or who find themselves in transitional living situa-
tions regardless of gender, race, religion, or nationality! We’re very grateful for your generosity, and also to
those who donated gifts through Share the Light during the holiday season.

Upcoming programs and events:
Memorial Hall Library in Andover is hosting several community conversations about social justice in the
coming weeks. For more information and to register, visit www.mhl.org and click on events:
Mass Incarceration: A Time for Reform – Thursday, January 14 7:00 pm
Mass incarceration is one of the most pressing social justice issues in the United States. The US has the
highest incarceration rate in the world, and our prisons and jails are disproportionately filled with Black
people, people living in poverty, and people with mental health and substance use disorders. Alexi Jones, a
policy analyst at the Prison Policy Initiative, will break down some of the most pressing issues in criminal
justice reform, including the shockingly high number of people who are locked up in the United States, the
stark racial disparities throughout our criminal justice system, and areas that are ripe for reform.

Academy in Lawrence. About the book: Reynolds lends his signature flair to remixing Kendi’s award-
winning Stamped from the Beginning into a powerful “not a history book” primer on the historical roots and
present-day manifestations of anti-black racism in America. In 5 sections, Reynolds’s conversational text
discusses the influential figures, movements, and events that have propagated racist ideas, beginning in 1415
with the publication of the infamous work that laid the groundwork for subsequent religious justifications of
enslaving African peoples and continuing through the “war on drugs” and #BlackLivesMatter. Reynolds
discusses and differentiates between segregationist (“a hater”), assimilationist (“a coward”), and antiracist
(“someone who truly loves”) rhetoric via figures such as Angela Davis, W.E.B. DuBois, Thomas Jefferson,
and Cotton Mather.

Courageous Conversations: We Need to Talk About An Injustice: The Work of Bryan Stevenson,
Wednesday, February 10 7:00 pm
Attendees are invited to watch award-winning attorney, author and social justice advocate, Bryan Stevenson’s
2012 TED talk, We need to talk about an injustice BEFORE the event. In an engaging and personal talk —
with cameo appearances from his grandmother and Rosa Parks — Stevenson shares some hard truths about
America’s justice system, starting with a massive imbalance along racial lines: a third of the country’s black
male population has been incarcerated at some point in their lives. These issues, which are wrapped up in
America’s unexamined history, are rarely talked about with this level of candor, insight and persuasiveness.
Courageous Conversations and Memorial Hall Library will host a virtual facilitated discussion about the
issues he raises in the talk, including where we find ourselves as a nation and what we can do to change the
current system of mass incarceration.

If you know of other programs of interest, of a community organization in need, or have an idea for a Social
Action initiative, please let us know! 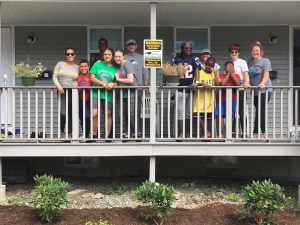